"The contents of a garbagecan are determined by which path I choose to perceive, not by what somebody else chose to discard."
―The Garbageman demonstrating his wisdom 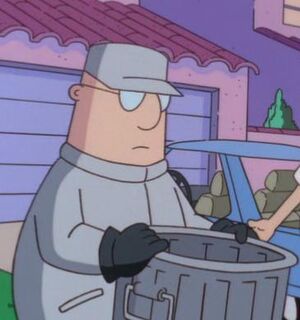 The Garbageman, often referred to as the World's Smartest Garbageman, is a mysterious and philosophical figure and arguably the smartest character in the Dilbert universe. The calm garbageman is a skilled inventor, having created all sorts of advanced technologies including a weather control device, a phaser and an anti-stupidity gun. He is acknowledged as the only garbageman in the city and is known to use wormholes through the space fabric (or shortcuts as he calls them) to be able to collect all the houses in no hurry.

The Garbageman rarely appears in the strip, but has had more prominent roles in the TV series. He frequently helps Dilbert to solve extremely complex problems, both technical and philosophical, with seemingly no difficulty. He is also good friends with Dogbert, with whom he created the first Internet browser pretty much as a joke; and Ratbert, to which he has explained quantum physics and other complicated matters. He has also expressed admiration for Ratbert's tremendously simple lifestyle and stated that the best things in the world are silly. The Garbageman often appears "out of nowhere" in the most convenient times, sometimes with the most convenient objects, such as the body of Benjamin Franklin and a special chemical that could revive the inventor (you wouldn't believe what people throw away). He has also appeared inside Dilbert's kitchen in "The Merger" to help Dilbert solve his "familial" dilemma; and pretended to be a doctor to explain to Dilmom about young Dilbert's engineering knack in a flashback scene in "The Knack". In "The Dupey", he hinted to Dilbert that he created an entire race, but something happened to it. He broke of the conversation, saying he didn't want to talk about it.

In his first appearance, he points out some corrections he made to a sketch Dilbert has thrown away. When questioned by Dilbert about why he became a garbageman, he points out that the real question is why Dilbert became an engineer. Scott Adams himself was once questioned about why such a genius character chooses to works as a garbageman, and stated that the joke is that we cannot really question the garbageman's career choice, since HE is smarter than we. It is also of philosophical interest that the smartest character in the strip is neither a manager nor an employee but one completely separated from the company and the business world.

The Garbageman is voiced by Maurice LaMarche in the animated series.

Community content is available under CC-BY-SA unless otherwise noted.
Advertisement